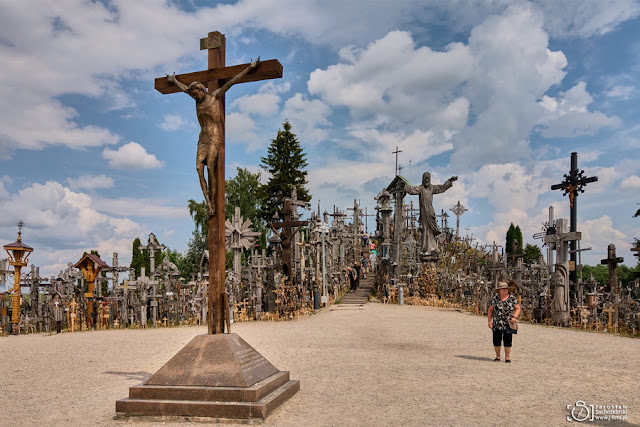 Hill of Crosses (Lithuanian: Kryžių kalnas) is an incredible and magic site about 12 km north of the city of Šiauliai. It is a major site of Catholic pilgrimage in Lithuania. The first crosses were placed on the former Jurgaičiai or Domantai hill fort after the 1831 Uprising.  After the 3rd partition of the Polish–Lithuanian Commonwealth in 1795, Poland and Lithuania became part of the Russian Empire. Poles and Lithuanians unsuccessfully rebelled against Russian authorities in 1831 and 1863. Families could not locate bodies of perished rebels, they started putting up symbolic crosses in place of a former hill fort. Several generations of Catholics from Lithuania, Poland and all over the world brought here not only crosses and crucifixes, but statues of the Virgin Mary, carvings of Lithuanian patriots and thousands of tiny effigies and rosaries have been brought here by Catholic pilgrims.  The site took on a special significance during the years 1944–1990, when Lithuania was occupied by
4 comments
Keep reading 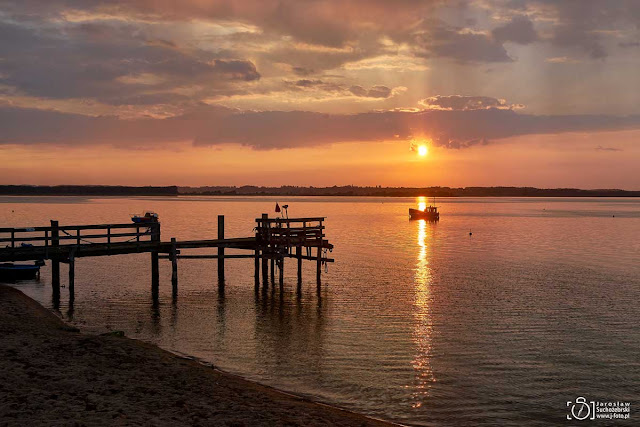 The Bay of Puck, is the western branch of the Bay of Gdańsk in the southern Baltic Sea, off the shores of Gdańsk Pomerania, Poland. It is separated from the open sea by the Hel Peninsula. The bay Bay covers an area of approx. 40.000 ha and is very shallow; it has an average depth of 2 m to 6 m. There is a shallow sand-bank from Rewa to Kuźnica in the middle of Hel Peninsula, that's why the bay is available only for small boats and yachts. There are contains a variety of shore types - sandy beaches, gravel beds, stony outcrops, clay cliffs, vegetated river mouths etc. The bay is protected as marine part of Seaside Lanscape Park. The Bay is situated nearby the major harbour city of Gdynia and very popular tourist resort of central Polish coast. The main ports are Puck, Jastarnia, and Hel.
4 comments
Location: Rewa, Poland
Keep reading 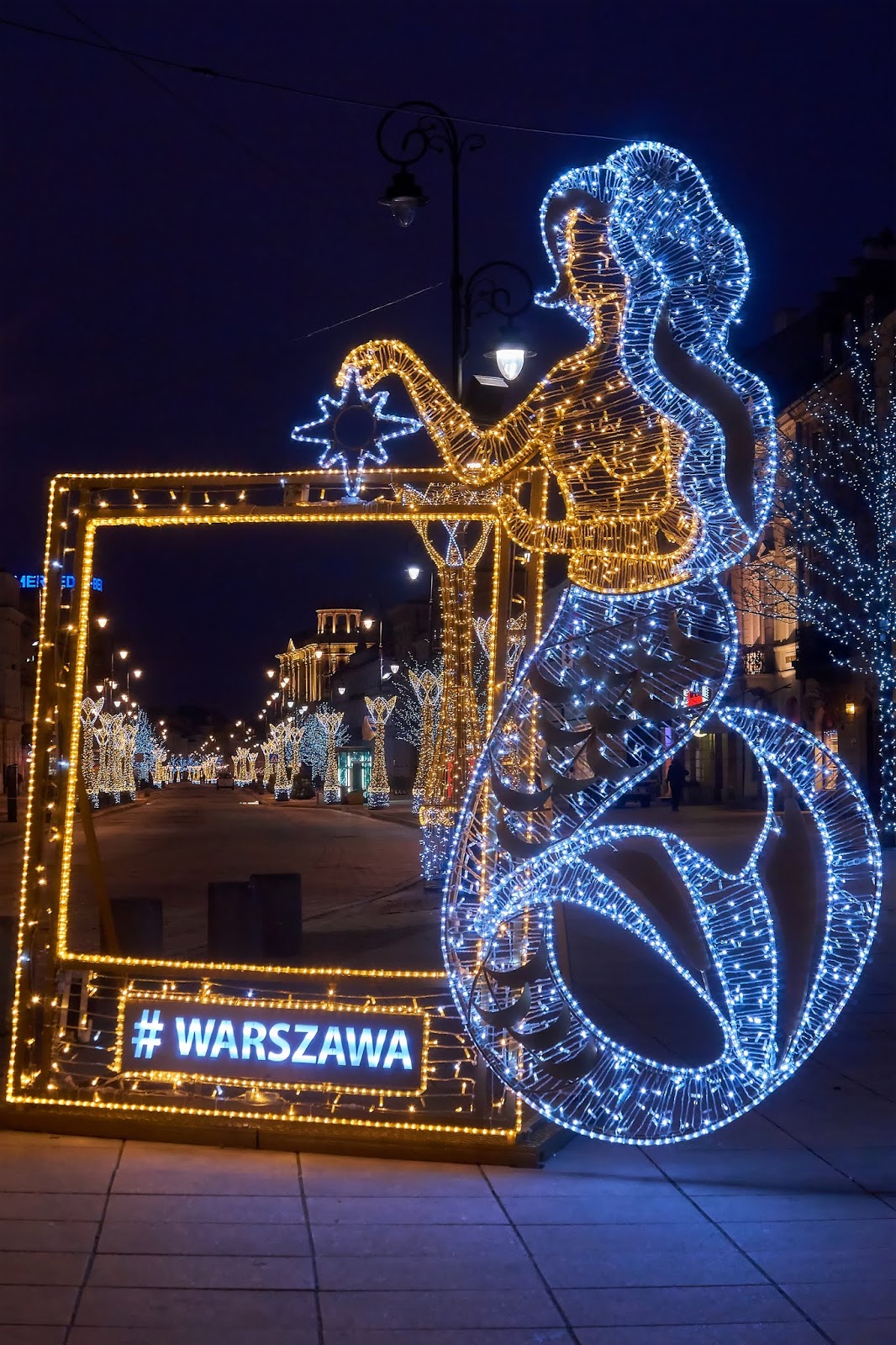 Warsaw, the capital of Poland, is sparkling with Christmas lights. The streets are illuminated with many lights and colourful illuminations. The whole lighting installation is over 20 km long. The lights are set up mainly along the Kings Route (Trakt Królewski) – starting with Zamkowy Square, Krakowskie Przedmieście Street, Nowy Świat Street, Trzech Krzyży Square, and Aleje Ujazdowskie Street, up to Belweder Palace and many other streets and squares.  You might also read other articles about beautiful places in  Warsaw (click) . *  *  * This post is linked at:  Our Word Tuesday
8 comments
Location: Nowy Świat Street, Warszawa, Poland
Keep reading 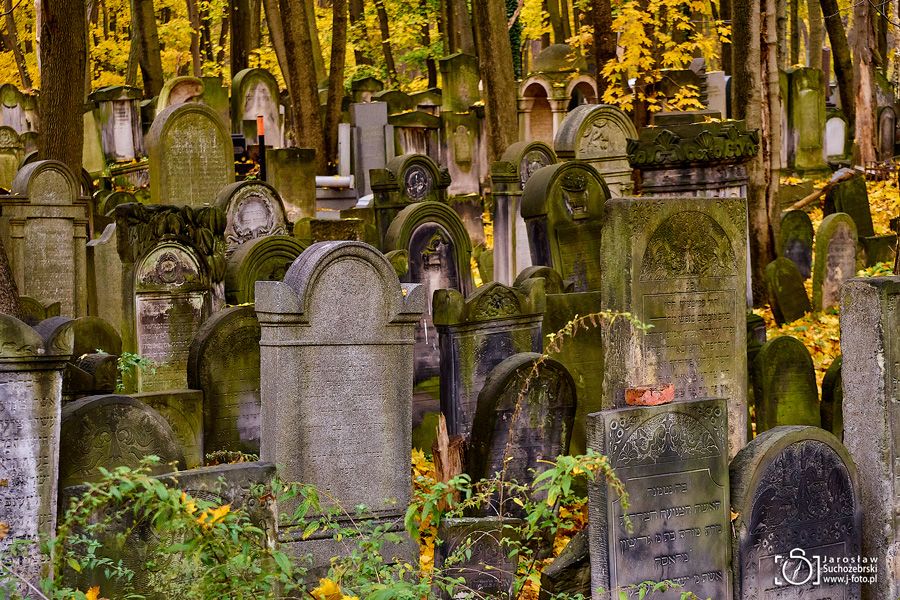 The Warsaw Jewish Cemetery is one of the largest Jewish cemeteries in Europe and in the world. This Wola District cemetery was established in 1806 beyond the city trenches (Polish: okopy ), their course marked by today’s Okopowa Street. The cemetery occupies an area of 33.4 ha and it is the resting place of over 200,000 persons, many generations of Jews Varsovians. The cemetery is owned by the Warsaw Jewish Community and still serves as a burial place today. The cemetery, which has become a dense forest in the post-war period, is filled with monuments dedicated to notable persons such as politicians, spiritual leaders, inventors, economists and others. Many of the markers are simple, others are elaborately carved and richly decorated. Large mausoleums appear in styles ranging from Egyptian Revival to Art Deco. The cemetery is divided into an area for women and an area for men. Moreover, there is an area of the Orthodox and for the Reformed deceased. Unlike other
12 comments
Location: Jewish Cemetery, Warsaw, Poland
Keep reading

Catching the colours of autumn 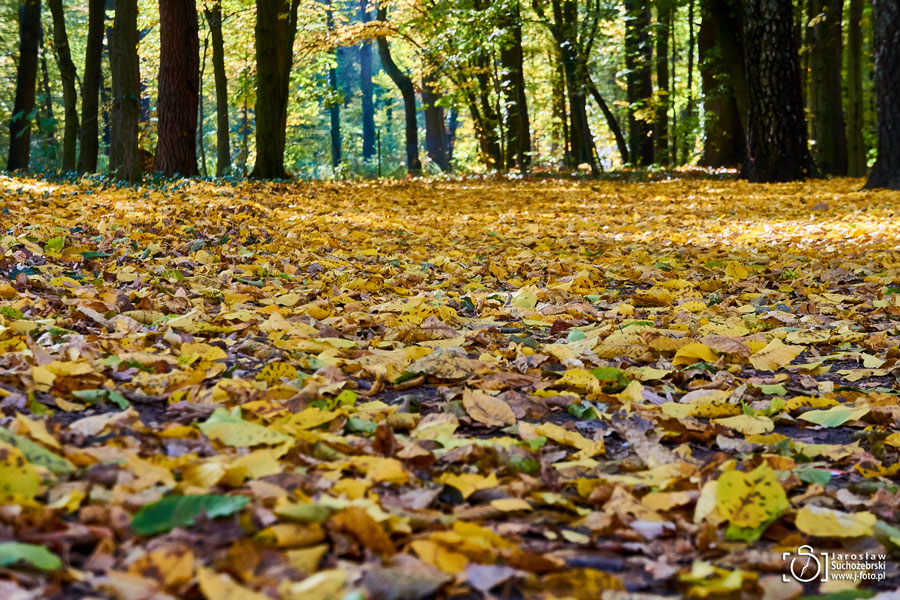 Autumn can be one of the finest times to experience walking through the park. Lift your spirits with the wonderful colours of Autumn. This post is linked at:  image-in-ing
6 comments
Location: Grodzisk Mazowiecki, Poland
Keep reading

The Uruski-Czetwertyński Palace in Warsaw, Poland 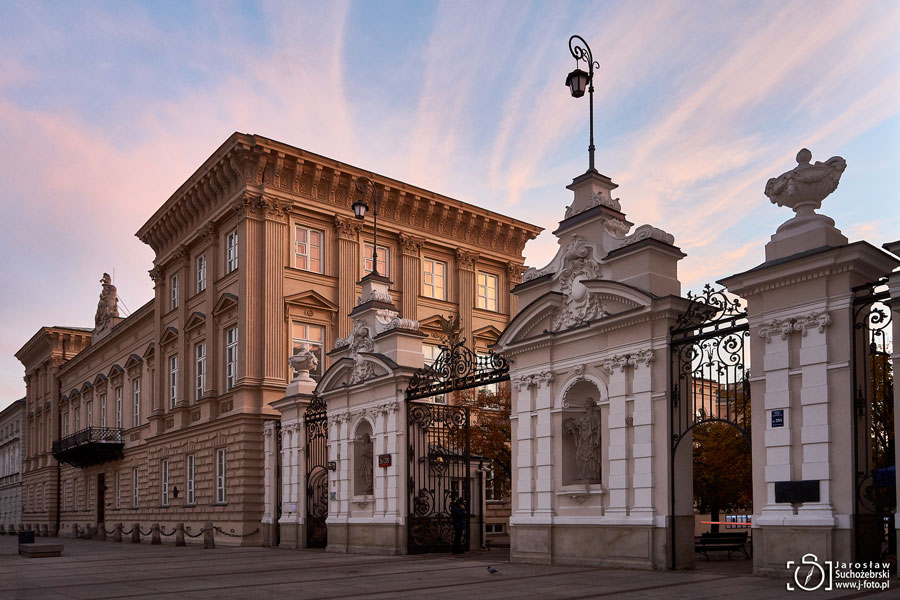 Uruski-Czetwertyński Palace and the University Gate The Uruski-Czetwertyński Palace is located in Warsaw at Krakowskie Przedmieście (Cracow's Suburb) street no 30. This is one of the most impressive former magnate residences at the Royal Route. The road leads from the summer royal palace in Wilanów to the Royal Castle in the Warsaw Old Town.  The Royal Route (Krakowskie Przedmieście street) The palace was built around in the Baroque style 1740 for Stanisław Poniatowski, father of Stanisław August, the future king of Poland. It was here that Stanisław August learnt he was elected monarch of the Polish-Lithuanian Commonwealth. The palace changed hands several times. In 1843 it became the property of Seweryn Uruski. Uruski chose to demolish the palace and to erect a new building in the Renaissance architectural style. The construction work lasted from 1844 to 1847 under the direction Andrzej Gołoński. In the years 1893-1895, the palace was renovated and the new north ou
12 comments
Location: Uruski-Czetwertyński Palace, Krakowskie Przedmieście 30, Warsaw, Poland
Keep reading
More posts 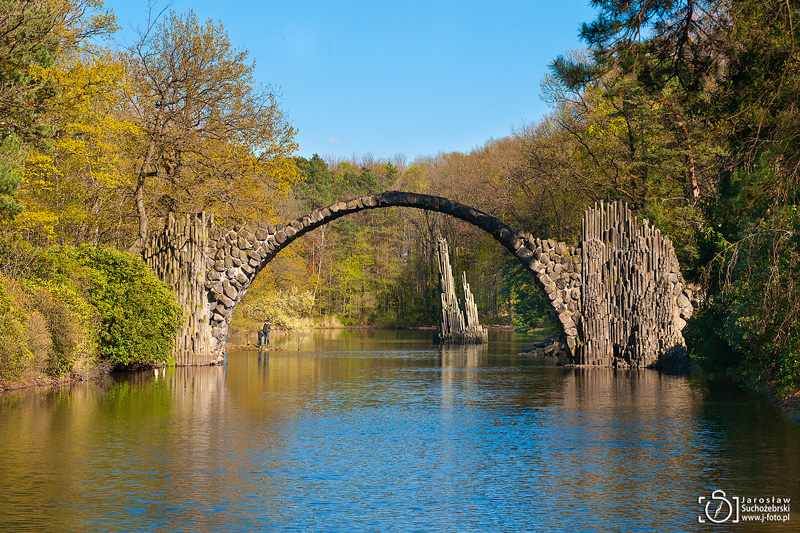 Kromlau is a small and charming village located in the municipality of Gablenz, Germany, less than 6 kilometres from the Polish border. In Kromlau is one of the largest landscape parks in Saxony. The park lies in the Muskau Arch area (learn more at:   Muskau Arch - UNESCO Global Geopark ).  The park is a beautiful example of an English garden and has many small ponds and lakes. The Azalea and Rhododendron Park in Kromlau was commissioned by Friedrich Herrmann Rötschke, the knight of Kromlau, in the middle of the 19th century.  The Rötschke's landscape park was created after location of Fürst-Pückler-Park in Muskau ( lick learn more at: Muskau Park - World Heritage Site ) . The "little Pückler" spared a little bit of money. Rare woody plants, mythological and rococo statues, basalt caves as well as a bow bridge of stone blocks and basalt stone were design elements of his park. He also built the hunting lodge in the park and surrounded it with flower beds.
Keep reading 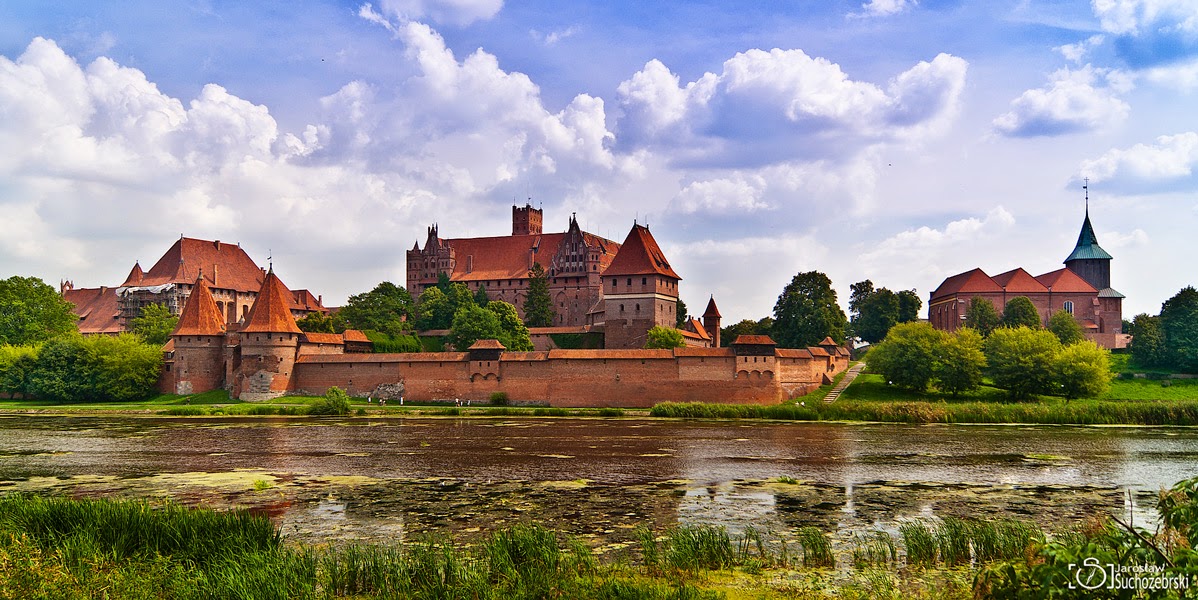 Malbork is a town in northern Poland in the Żuławy region (Vistula delta). There is located an impressive Medieval castle. This biggest brick castle in the world and the largest castle of the Gothic period is one of Europe's most imposing fortresses - "the largest pile of bricks north to Alps". The castle in Malbork was built by the Teutonic Order after the conquest of Old Prussia. The work was started in 1274 on the southeastern bank of the river Nogat. The fortress was named Castle of Mary - Marienburg in German. In 1309 the castle and the city became the capital city of Teutonic Order's state. High Castle surrounded by moats and walls and became the office of Grand Masters and the order's highest officials. Middle Castle become house of lower rank brothers and guests. There was also a Great Refectory infirmary for older and ill brothers. In 14th and 15th century was build third segment - Lower Castle - armory, granary, storehouse, as well as St. Lawrenc
Keep reading 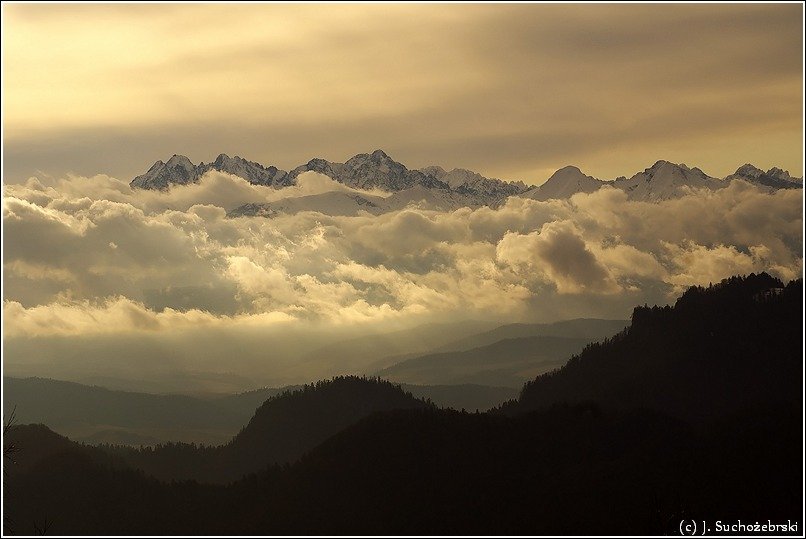 Tatra Mountains and Pieniny Mountains Poland is a relatively low-lying country. More than 90% percent of its territory lies ca 300 m above sea level, but there are three main mountain ranges located mainly in the southern part of the country. They run in a direction from west to east and include the Carpathian Mountains (Carpathians), the Sudety Mountains (Sudetes), and the Świętokrzyskie Mountains (Holy Cross Mountains).  All of these mountain ranges, except for the Świętokrzyskie Mountains form a natural southern border of Poland. Sudetes Śnieżka (1603 m a.s.l.)  - the highest peak of Karkonosze Mountains Sudetes (Sudety Mountains) The Sudetes stretches from eastern Germany along the south-western Poland. The highest peak of the range is Śnieżka in the Karkonosze Mountains (Giant Mountains) on the Czechia-Poland border, which is 1,603 metres in elevation. The Sudetes are usually divided into Eastern Sudetes (in Poland are two ranges: Golden Mountains and Śnieżn
Keep reading 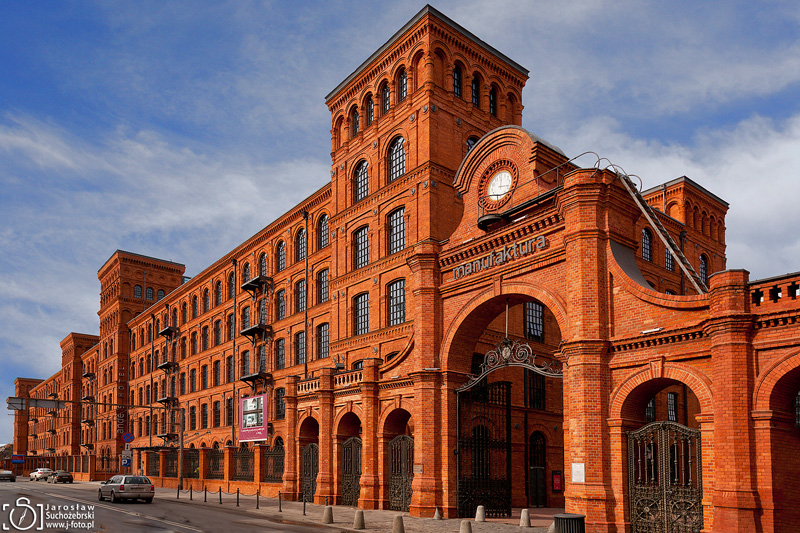 Spinning mill (today hotel) and main gate of former Poznański's factory   The beginnings of the Poznański textile factory  Izrael K. Poznański was born on 25 August 1833 in Aleksandrów near Łódź, as the youngest son of Kalman Poznański. A year later, the Poznańskis moved to Lódź. In 1851 he married Leonia Hertz, daughter of the clerk of Jewish hospitals in Warsaw. This marriage enriches Izrael Poznański’s, a master of „weaving profession” at the time, fortune by a manufacturer worth 500 roubles. Main gate of the former Poznański's factory He started to work for Karol Scheibler's company in Łódź. However, he was gradually setting out to accomplish his greatest project - the construction of a great factory. From 1871 Poznański began to buy out the green-licks between Ogrodowa, Stodolniana (now: Zachodnia) and Podrzeczna Streets. The construction of Poznański’s industrial complex began in the 70s of 19th century. The first building was a weaving mill with a saw-t
Keep reading 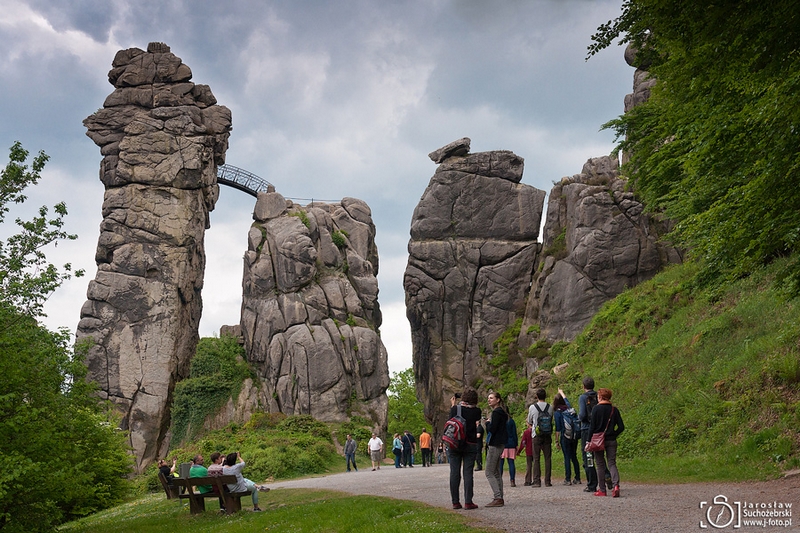 During travelling through the scenic Teutoburg Forest in the German state of North Rhine-Westphalianear, you can find the picturesque group of rocks a few kilometres from the town of Horn-Bad Meinberg. Its name - Extersteine - usually translates as stones of the ridge. This is a highly unusual rock formation. In an area otherwise devoid of large rocks, the soaring, slender columns of Externsteine stand out as they rise sharply and with no little majesty from the surrounding landscape. The 13 sandstone pillars have been ornamented over the millennia by human hand. Yet the true origins of the star stones can be discovered through geology. The unusual geological formation consists of a hard, erosion-resistant sandstone (so-called Osningsandstein), laid down during the early Cretaceous era about 100 million years ago. Thousands of years of erosion have washed the rocks from the surrounding soil and then were formed the surface of the stone. The rock formation stretches for seve
Keep reading